I love writers. I love that they put their heart and soul into something that might never see publication, yet they do it anyway because they just have a story to tell. When publication actually happens, (it’s true, it can actually happen!) we must clap very loudly.  Leave a comment at the end to win a book! 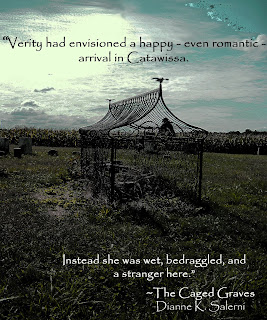 “The year is 1867, and seventeen-year-old Verity Boone is excited to return from Worcester, Massachusetts, to Catawissa, Pennsylvania, the hometown she left when she was just a baby. Now she will finally meet the fiancé she knows only through letters! Soon, however, she discovers two strangely caged graves . . . and learns that one of them is her own mother’s. Verity swears she’ll get to the bottom of why her mother was buried in “unhallowed ground” in this suspenseful teen mystery that swirls with rumors of witchcraft, buried gold from the days of the War of Independence, and even more shocking family secrets.”

Doesn’t that sound good? And it was! Isn’t “Verity” a great name for a protagonist?  I “met” Dianne through her blog, when she and Marcy critiqued the First Page of a novel I’m STILL working on. I’m very intrigued by writer’s habits and Diane so nicely accepted an invitation to chat. Here’s Dianne, with an exclusive author interview!

Hi Dianne!  Were you always a writer?
Absolutely. I was writing stories even before I could write – or at least I drew them and got my parents to write the words for me. I kept notebooks full of stories throughout my childhood. In fact, the only time of my life when I did very little writing was when my children were babies and toddlers. Parenthood diverted my creative energies into scrapbooking for awhile.
How in the world do you find time with a full-time job and family?
My children are 13 and 16 now and quite independent. My husband and my daughters support my writing habit and do whatever they can to help – cooking dinner and cleaning up most nights so I don’t have to. I get time to write after school (I’m a 5th grade teacher.) and in the evenings. I also write on weekends – and like a madwoman during all school vacations.
What is your process: Drafts? Writing group? Computer? Notebook?
I write on a computer. The only time I resort to paper is when I’m stuck in a faculty meeting and write notes for a story while … um … pretending to take notes on the meeting.
I don’t outline. Any story I try to outline comes out lifeless and dull. I work best starting with a premise, a beginning, an ending, and a few plot points in between. That’s not to say that the first draft doesn’t become a painful ordeal, because it does!
Two critique partners, Marcy Hatch and Krystalyn Drown, read my chapters as I write – and I do the same for them. They keep me on target during the torturous first draft. My husband also reads the first draft. He has a keen ear for dialogue and lets me know anytime a character starts talking “out of character.” In addition to the CPs, I also have a number of beta readers I call on for later drafts.
Why do you write YA? Do your students give you ideas? Do they think it’s cool you are a
published writer?
We Hear the Dead, was the first YA novel I’ve ever written. I chose to write that book for YA because the main character, Maggie Fox, was 14 at the beginning and 23 at the end. Then I continued writing for YA, which eventually led to my second published book, The Caged Graves. 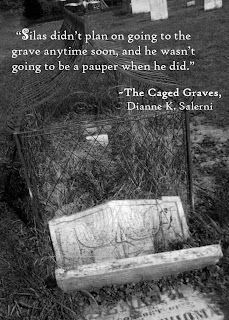 However, when I submitted a YA contemporary fantasy to my agent about a year ago, she immediately saw that my premise would work better for MG and asked me to lower the age of my main character from 15 to 14. The book promptly sold in a 3-book deal to HarperCollins, but that same character had to drop to age 13. So, now I’m a MG writer, too!
My students think it’s cool that I’m a published author, and yes, they help me. When I needed a new title for my first book, which was originally called High Spirits, I threw idea after idea at my editor to no avail. I shared my dilemma with my class, and one of my 5th grade students came up with the title, We Hear the Dead.
Last year’s class was there when I got the email about the HarperCollins deal. (I was unable to function the rest of that class period.) They lived through several editorial letters with me – and complained more than I did about the revisions I had to make! They got a sneak preview of the cover, and HarperCollins actually changed something based on their reaction. Knowing how invested they were in the book, my editor gave a thumbs-up to my listing the whole class in my Acknowledgments.
Do you have any advice in the face of rejection?
My biggest successes have come after moments of devastating rejection. One double rejection was such a blow that I considered quitting and never writing again except for my own private amusement. It was only a few weeks later that I received an offer of representation from the most wonderful agent in the business, Sara Crowe.
And my biggest book deal to date, the 3-book deal with HarperCollins, came immediately after another double rejection of two manuscripts from a publisher.
Rejections are horrible. But if you let them stop you in your tracks, you’ll never find out what might happen if you keep going a few steps more.
Was your trip to Wales this summer mainly for research? Tell us about your latest book.
When my family was planning a trip abroad, Wales came up for discussion because my daughters wanted to visit the Doctor Who Museum in Cardiff. I realized I could combine Doctor Who (and a BBC studio tour) with King Arthur research in south Wales, and Cardiff officially went down on our itinerary!
My next book is the first in a series of MG contemporary fantasy adventures with a King Arthur connection.  Here’s a blurb:
THE EIGHTH DAY:
When seventh grader Jax Aubrey wakes up to a world empty of people, he does what anyone would do: assumes it’s the apocalypse, ransacks the local Walmart, and fortifies his guardian’s house against zombies. When he wakes up the next morning to a normal Thursday, Jax wonders if he’s lost his mind.  But his 18 year-old guardian, Riley Pendare, also experiences Grunsday, an extra day squeezed between Wednesday and Thursday.  Jax learns that some people exist only on Grunsday, including the girl who’s been hiding in the house next door for the last 35 years — her life skipping over seven days at a time like a stone skimming across a pond.

A mysterious girl who knows nothing of the regular world? Jax can’t think of a better way to spend his extra 24 hours than trying to befriend her.  But Evangeline is the key to a 2000 year-old spell with its roots in Arthurian legend. Jax’s guardian is her reluctant jailor, sworn to keep her out of the hands of those who would use her – and kill her if he can’t. When Jax accidentally leads a pack of human bloodhounds to their door, it comes to a terrible choice: face a real apocalypse or sacrifice Evangeline.

Do you have any strange rituals or interesting quirks?
Well, I’m definitely strange and quirky. I talk to my characters a lot, and they talk to me. My family knows when they catch me muttering to myself, I’m usually talking through a piece of dialogue, testing it out to see how it sounds. That’s not to say that they don’t make fun of me. They do. But at least they don’t call for the men in the white coats.
Sounds like my kind of lady!

Bio: DIANNE K. SALERNI is a fifth grade teacher by day and a writer by night. She’s the author of YA historical novels, We Hear the Dead (Sourcebooks) and The Caged Graves (Clarion/HMH), and a forthcoming MG fantasy series, The Eighth Day (HarperCollins 2014). In her spare time, Dianne is prone to hanging around creepy cemeteries and climbing 2000 year-old pyramids in the name of book research.

Thank you so much, Dianne!

If you’d like to win a kindle version of The Caged Graves, please leave a comment…good luck!