By maisymak August 12, 2013 7 Comments
There seems to have been a small shift in the wind, like when Mary Poppins either comes or goes.  Things have suddenly changed in our world.
This summer in Arizona there were babies and toddlers, but we were also suddenly surrounded by teenagers and tweens. 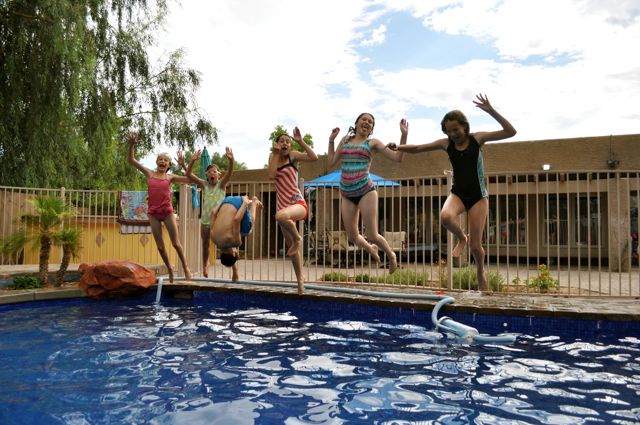 It’s only been a year, but so much has changed.  These girls and the one boy (poor Nellie, always surrounded by GIRLS) are as tall as their mothers and just as opinionated…dare I say mouthy? 🙂 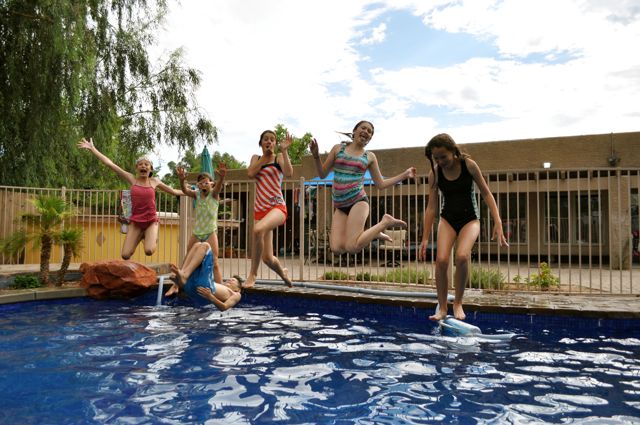 They’re confident one moment, insecure the next.  They’re loud one moment, then quiet and sullen.  They scowl then shriek with delight. 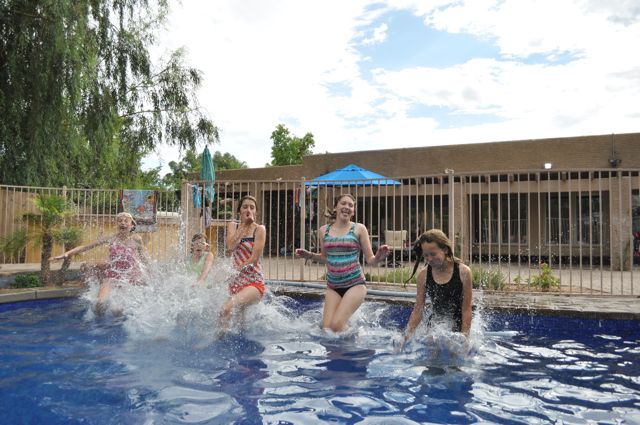 They’re funny, smart, and can hardly wait for the next big thing.  Whatever that is.  They carry cell phones (a recent addition in our home), text like crazy, and speak in text talk.
“Your hair is so gorg” (gorgeous)
“Sup awk!”  (super awkward)
“lol”
“Whatevs”
“That’s so adorb” (adorable) 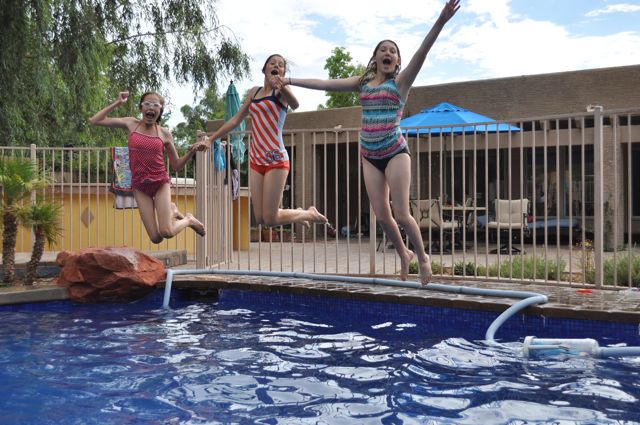 They spend HOURS in front of the mirror (not joking), take a million “selfies”, sleep in late, and can’t seem to fall asleep until every adult in the house is asleep. 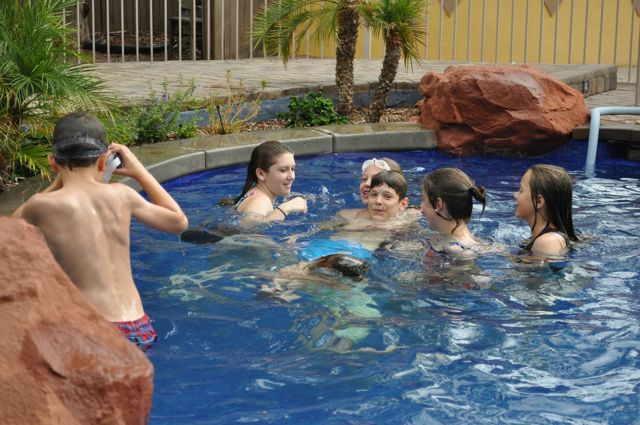 This year, when the adults were putting babes to bed, the teens were outside, swimming in the dark with the lights on the pool.  Taking photos, laughing, and coming in when they wanted, being in charge of locking up the pool for the night. And the weird thing was…we trusted them to do it.
I could hear them (as I lay in bed) in the kitchen laughing quietly, eating snacks, and feeling like queens in a castle.  This year I didn’t always know where they were or what they were doing.  This year they had a new freedom that wasn’t dictated by their parents like it was the year before.  It’s and odd thing.  In one sense it’s wonderful, but it also signals this whole new world that I’m not a part of, nor do they need me to be a part of. 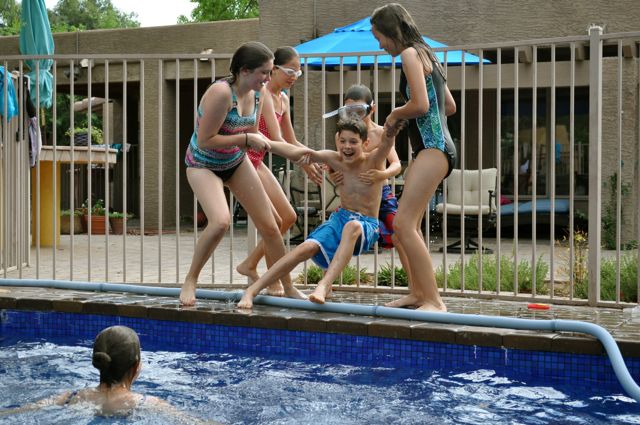 They’re always trying to one up each other.  Then they get mad and make up in one quick minute.
They can’t stand you one moment, then come crying to you the next because you’re the only one who understands.  Everything you do is wrong, you really don’t know anything about anything, but “let’s go ask mom” is a huge part of the vernacular. 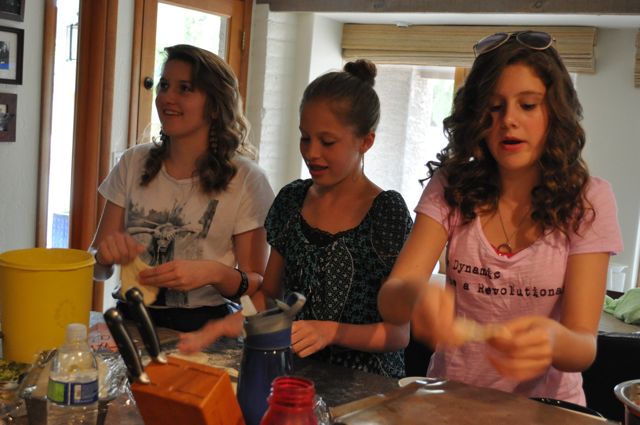 The eldest cousins, all born within just a few months of each other. I have a very clear image of them sitting on a couch, bald, crying for mama.  They see each other once a year and they pick off just where they left off.
But now they can cook, clean, and are capable of just about anything you ask (though sometimes they pretend to be clueless.) They hold, rock, and burp babies. They are little mothers-in-training.
Everyone is their “best friend.”  For instance, in one conversation, you can hear about five different “best friends.” 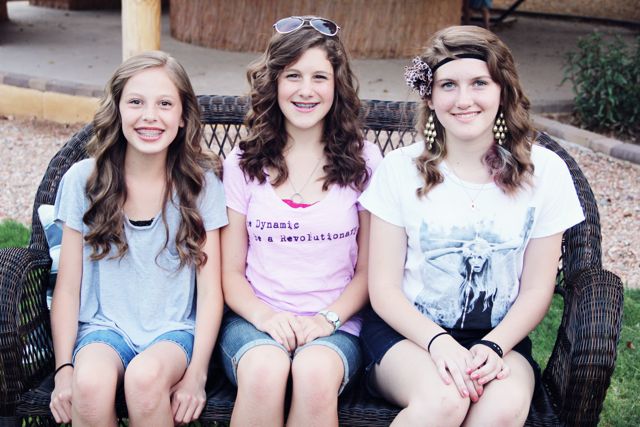 And they are so pretty, so talented, so ready for the world.  It almost breaks my heart that I only have four years left with my girl.  Four years is a wink.  Such a quick wink.

My brother laughs at my sentimentality.  What sentimental feelings?  Who, me? 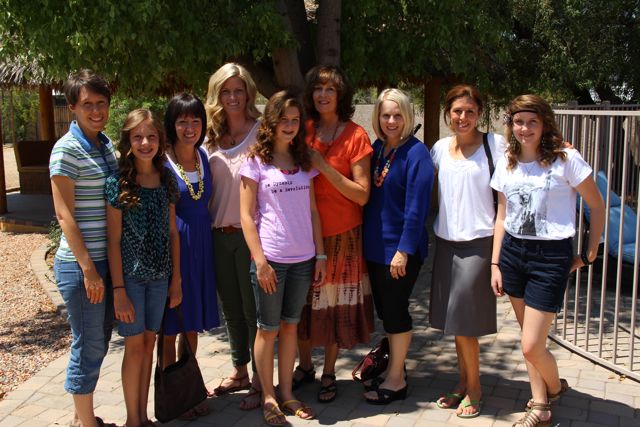 This year they somehow finagled their way into girl’s day out with the old ladies – lunch and pedicures. 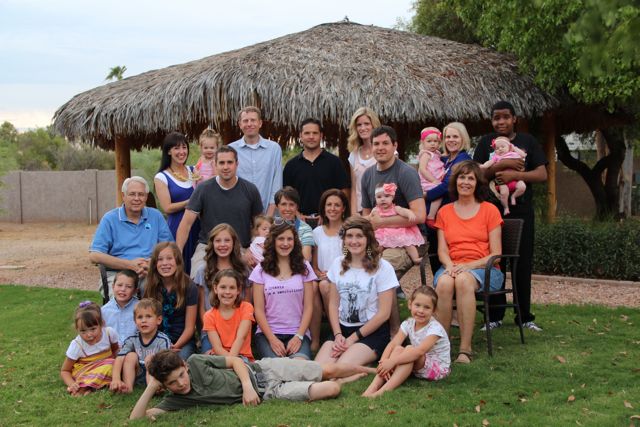 They kneel like one of the kids, but are as big as their mamas. 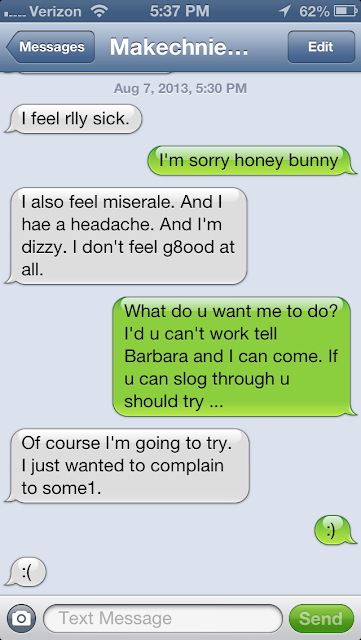 Cope recently acquired a cell phone.  She’ll tell you that she was the last person on the whole earth to have one, but she sure is excited about this new addition in her life.  She giggles over texts and the secret life she shares with her friends.  She loves to text me all the time (I love this one).  Here she is at work, not feeling good.
She has unlimited texting while I only have 250 a month. I have a feeling I’ll be paying a little extra every month.  I think it’s worth the conversations we have. 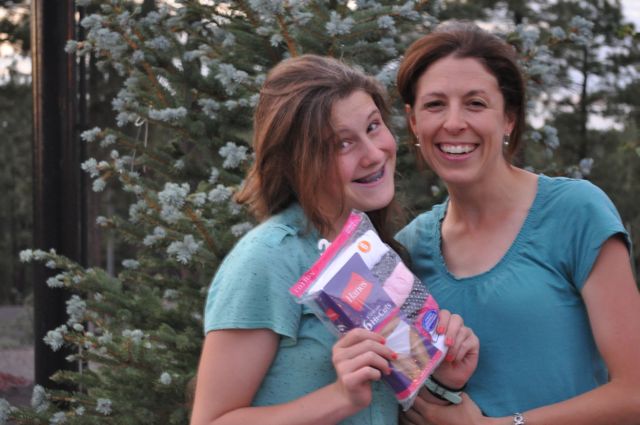 The teenager hates you one moment, and loves you the next.  They hurt your feelings, then endear you for life.  This girl makes me laugh daily.  She and her brother follow me around the house quoting books, movies, and Youtube stunts. Then they won’t say one word in the car.
This is a picture of Cope SUPER excited about the underwear I got her for her birthday right before going to the Grand Canyon (which she did ask for since her money is not worthy of such a purchase.)
She corrects me daily, loves to argue and prove a point, and I’ll admit it…is one of my very best friends.  We have mere weeks until she starts high school.  A whole new ball game.
Ah, around here it’s love in the time of teenagers.  The phrase that keeps coming to mind is “Love More.”
Here’s something I read from Saren, who took notes from Margaret Archibald, mother of eight amazing children:
I wonder what my teens say about me in their secret blog posts?
Were you close to your parents during the teen years?
Do you have some good advice?
Love,
A grateful mother