Love is a Split-Rail Fence

When I was younger, love was red roses, wild horses, and maybe a Ghost scene or two. You know, from the movie.  It looked nothing like the VMAs.

Don’t you love to people watch?  Study relationships, analyze the way couples interact in public, then wonder if they’re really that nice or rude in private.  I’m sure my discerning conclusions are always correct, but – maybe not.

My father used to counsel many a married couple.  He once told me, “You would be shocked at the number of people you only think are happily married.”

He shook his head.  “You would be shocked.”

Since that time, as a young lass, I’ve always been curious.  Who is happy and who is not?  And why?

Last week was our 16th wedding anniversary, me and my honey lamb.

There were no roses, wild horses, and sadly, there is no potter’s wheel sitting in the living room with a hunk of clay on top 🙂

We did go to a Red Sox game (that was a observation hoot!) and out to dinner, and it was grand.

We decided not to exchange gifts; too many other shared, mundane expenses like braces for kids, an unexpected car repair, and too many gelato trips last month.

But that morning I came home from an early run and the sun was just coming up, hitting the house.  I noticed the fence.
***

When we first moved into our home we had a little wooden, split-rail fence, but sadly, it rotted and we had to throw the wood away.
For six years I talked about wanting another fence.  Gregor did not want one.
Round and round we went.  I wanted the fence.  He did not.
Then, last May we were visiting Lowe’s and I saw the pieces of wood.  Split rail – it was like a kit.  A really easy kit you put together in two seconds.
“Look!” I said.  “It’s our fence!  Let’s get it.”
“No, no, no,” he said.  “I don’t want a fence.  It’s hard to mow around, I don’t like it, and we don’t need it.”
“I want it.”
“I don’t.”
“We have the trailer on the van right now – let’s get it now – it’s meant to be.”
“No, no, no, no.”
“I really, really want it and I’m not joking and I want it.”  I was starting to feel hysterical.  I really wanted that FENCE!  Maybe I was going to cry.
“Well I really, really DON’T want it,” he said.  He was not hysterical.  He does not cry over fences.
“Yes.”
“No.”
I may have said some other things, but have blocked them from memory.
I glowered.
He wouldn’t budge.
We left without the fence.  And I was mad.
Could he not see how much I needed this fence, how much it would complete my life? How much better the yard would look?
Life went on without the fence.  Just like it had for the past five years.  And since we had gone five years without a fence, it could very well be five more years. Oh well.  It would be alright, I suppose.  We give up wants for the ones we love.
Mother’s Day came.
It was a very busy weekend.  He had no time to get a gift.
But that morning my children led me outside and there by the garage were ten pieces of wood.  To build the fence.
Somehow, in his very busy day the day before, he made time to drive all the way to Lowe’s with the trailer on the van and picked out the ten pieces of wood, piled them by the garage in the dark, and went back to work.  For his wife.  Because she wanted the fence and he did not.
We built the fence together.  It did not take two seconds.  We had to dig.  We had to dig into New England soil.  Do you know why there are so many rock walls in New England?  It wasn’t because the early settlers had nothing else to do – they just had to do something with the rocks!  We had to dig faaaaarrrrr into the earth and had to use these special tools that left large gaping blisters on the man’s hands.  For days I would frown at them and he’d say, “That’s true love.”
And I heartily agreed.
And didn’t say anymore bad things.
Everyday I walk outside and I see the fence. 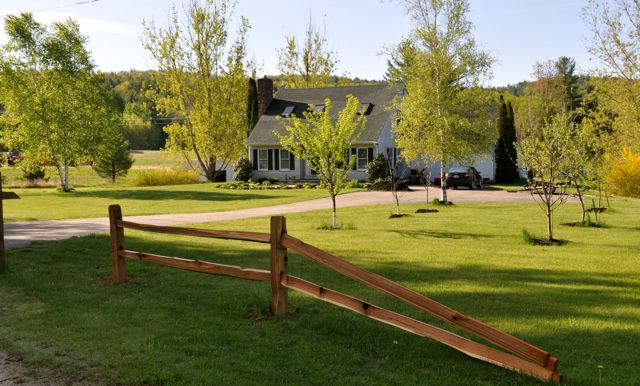 Every time I come down the road and pull into the driveway or run past the house I see the fence.
And I’m reminded of the evidence of true love.
It’s a small thing in my yard, but a big thing.
And I feel more inclined to be nice 🙂
To say yes next time he asks me to help change the awful rubber tube on the lawn mower.
Compromise.  Saying Yes when you want to say No.  When you don’t want to.
It’s been 16 years of marriage.  And that’s what I know from a wooden fence that sits on the front lawn.