By maisymak July 11, 2013 6 Comments
It’s been thousands of miles
since we last met 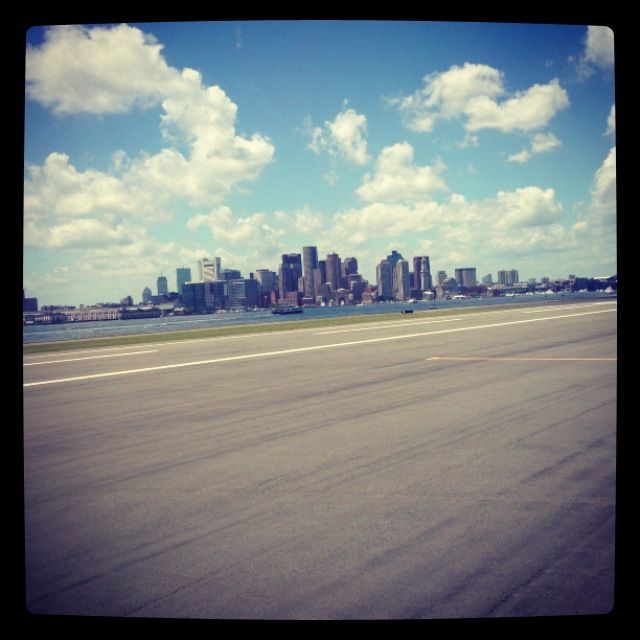 A few days ago we took off from Boston, left the big city and headed west
Let us digress for one moment and say that I’ve discovered instagram
Has life ever been so exciting?
I wanted my secret code name to be Maisymak, but someone had already TAKEN MY NAME.  So I’m going by something even more creative…amymakechnie.
Yeah.
Find me there and follow my every move
and then I can follow your every move 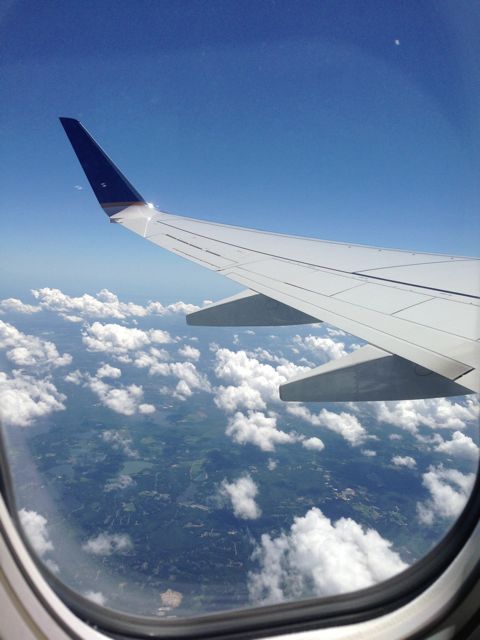 I’m quite thrilled with the quality of the little iPhone.  I’m snapping pictures left and right.  Don’t you love clouds?  I had one small moment of panic when I looked out the window – it was like extreme vertigo – and everything was small and I was so HIGH.  Some self-therapy talk snapped me back to reality. 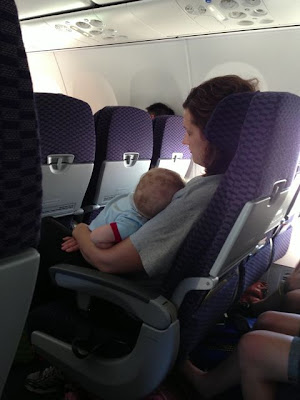 We had a delay on the tarmac – 45 minutes of waiting. I watched this mama in front of me look at her husband.  I thought she might cry.  I remember those days – both the kindness and inconsiderate comments about having to sit by my crying brood.
The mama was utterly exhausted; bags under her eyes from late, sleepless nights and crawling, sweating, crying babies all over her in a tight, confined space.  This is the rule:  NO ONE complains about the babies.  I would have to glare you into a shrinking spot on the airplane floor. 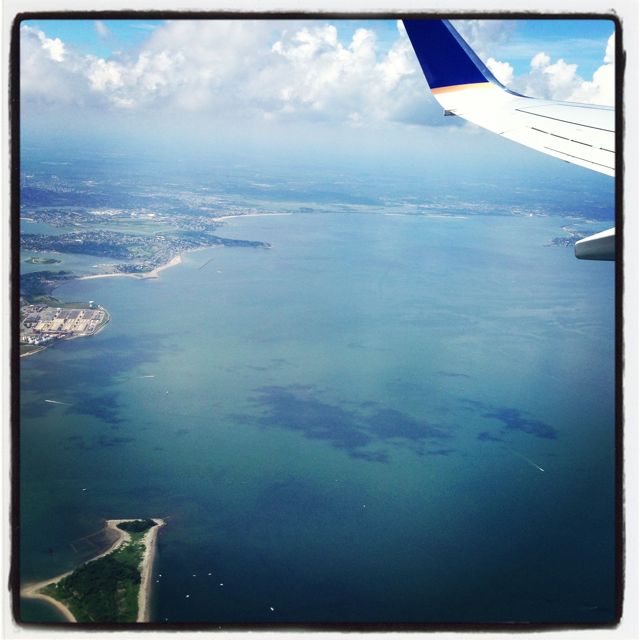 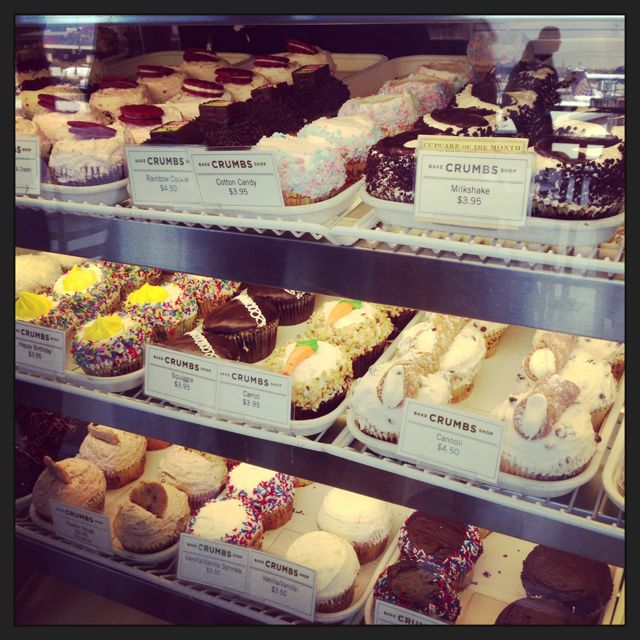 Newark was cool.  Because of the cupcakes 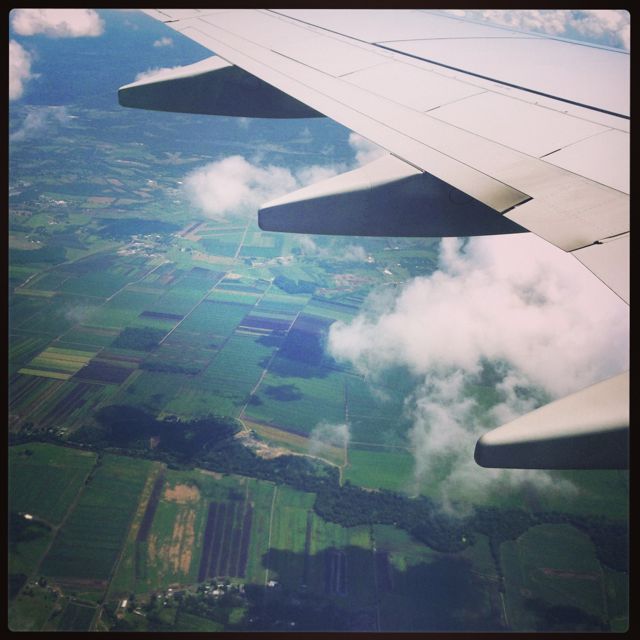 Flying over my homeland; the vast midwest.  That’s where your corn comes from! 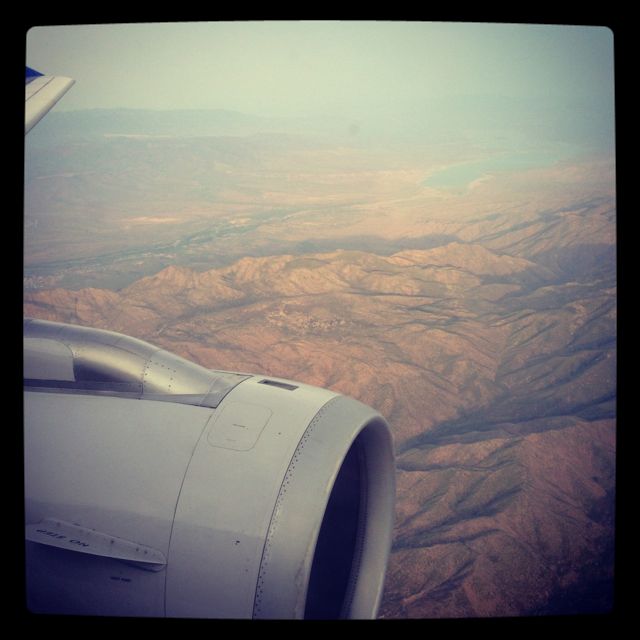 And then we decided to fly to the HOTTEST place on the planet:  The deserts of Arizona. 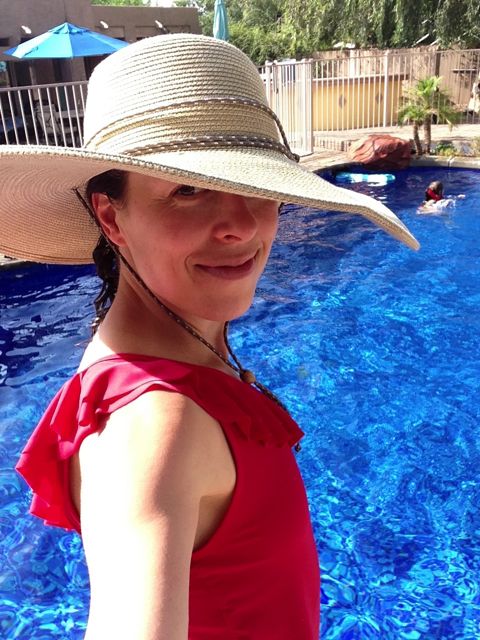 Where we have spent hours by the pool just to stay alive.  I was reminded why I feel sick for three days every time we come to the desert in July; it’s just heat acclimation.  Last year I actually took a pregnancy test I was so convinced nausea meant baby… 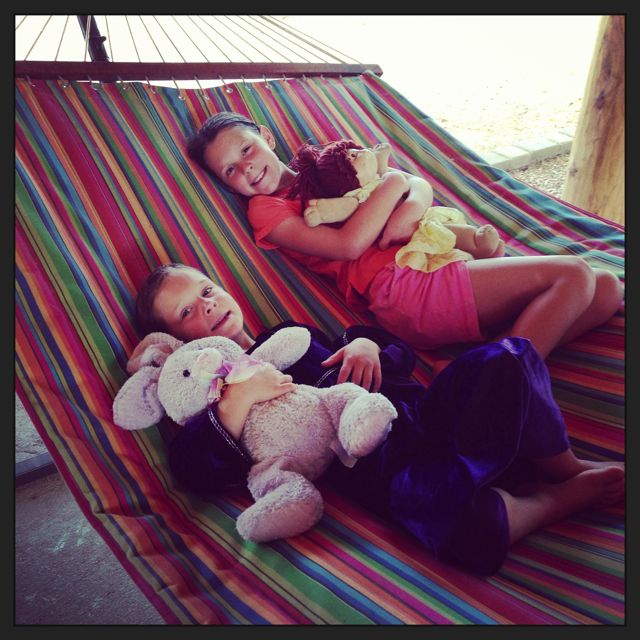 The kids love grandma and grandpa’s.  They discovered my old toys and cabbage patch baby. Her name is Annie Bessie. 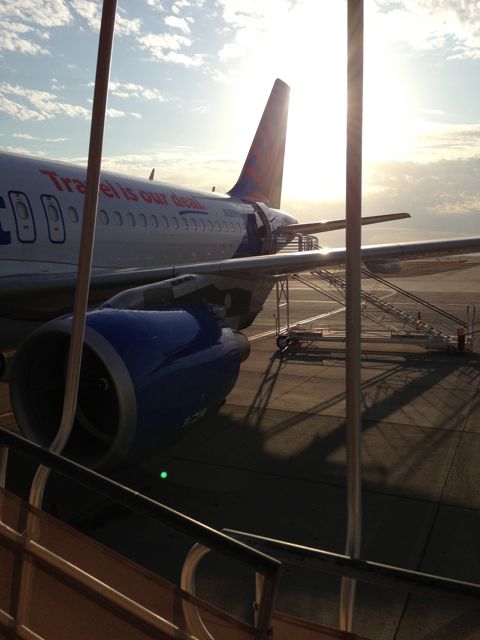 The day after we landed I boarded another plane all by myself and flew to Provo, Utah 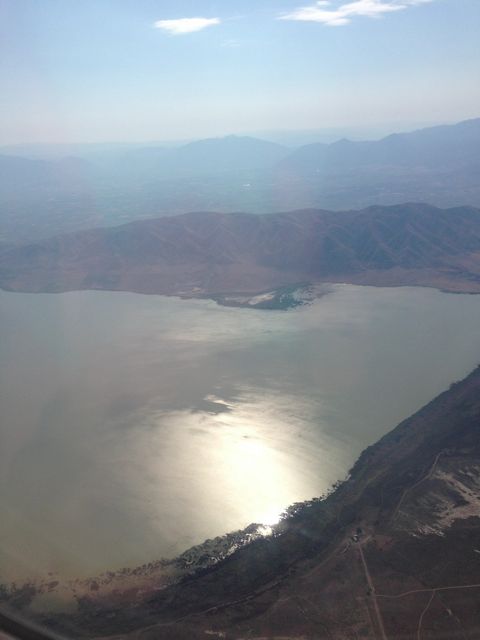 Flying over Utah Lake, a vast expanse of water in the middle of another desert 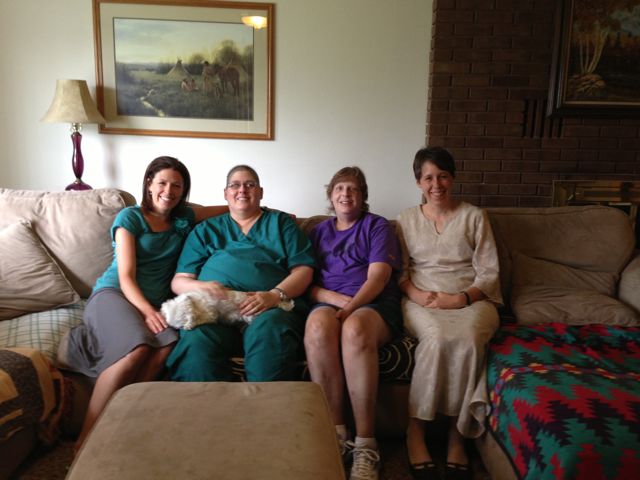 And saw my aunties who were best aunties during my childhood.  Margaret is suffering with the gene her and Angelina share.  Unfortunately, it wasn’t caught early.  But Margie is a trooper and Joanne is the sister you want by your side in such cases. 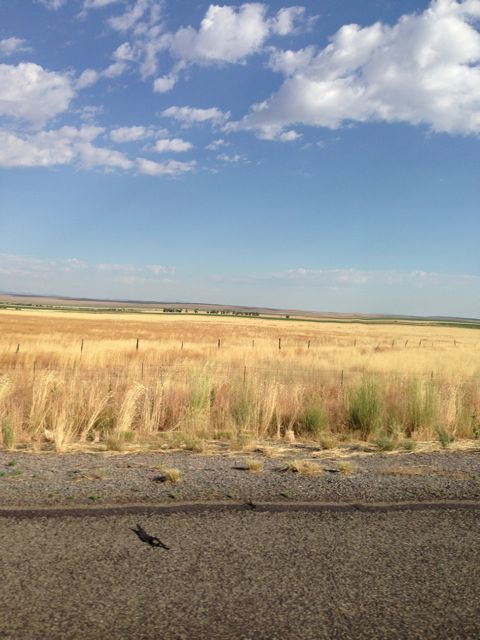 The next day I got in the car with my sister and four of her children for an 11-hour road trip.  We headed back down to Arizona…and drove through Butch Cassidy country.  He was from a nice Mormon family with 14 kids.  Actually I don’t know if they were nice.  I have a slight obsession with Butch after watching Butch Cassidy and the Sundance Kid about a million times.  This is southern Utah, with lots of bluffs and rocks for shoot-outs with the law.  Just in case the need ever arises, you’ll know. 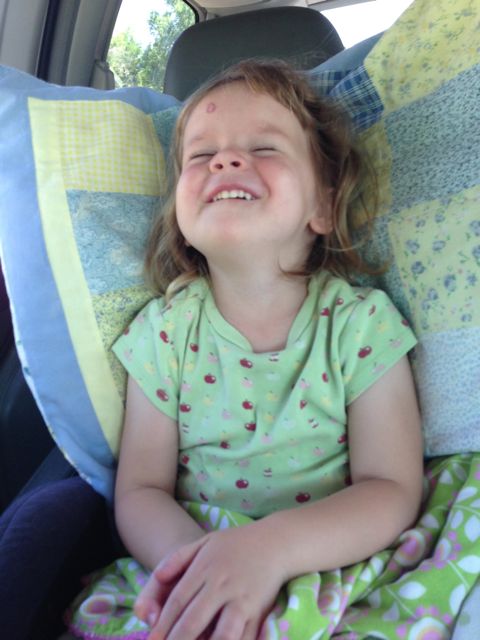 Now.  You are allowed to complain about children if you go on an 11-hour road trip with them.  But they were angels and I never needed to complain.  We heard, “Are we there yet?” at least 200 times.  No.  We were never there yet. 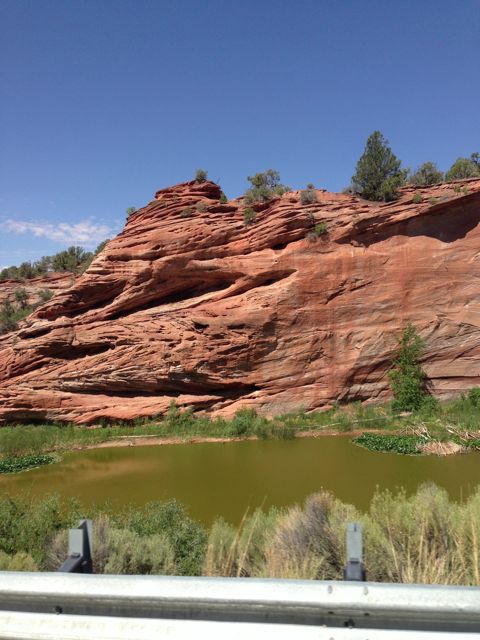 ‘
The red rocks of Utah; taken with an iPhone in a moving car.  That’s pretty much what I did the whole time.  I couldn’t help it.  We drove past Brice Canyon and Lake Powell – gorgeous. 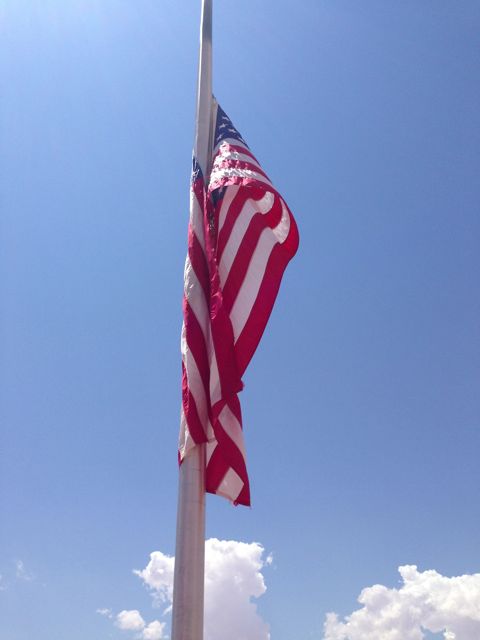 We passed into Arizona country where the flags are lowered to half-mast to honor the Prescott Arizona Hot Shots; the 19 firemen who lost their lives fighting a treacherous fire. 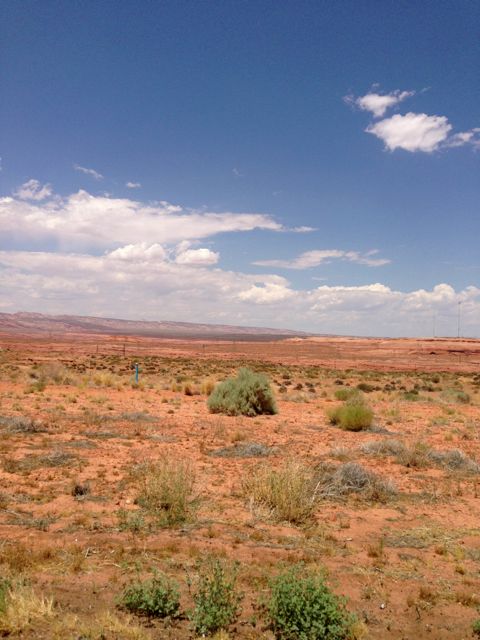 There was a long detour through utter desolation.  This is Navajo/Hopi country and I can’t believe anyone lives out here.  My father thinks I live in the sticks, but this – there wasn’t even a stick. 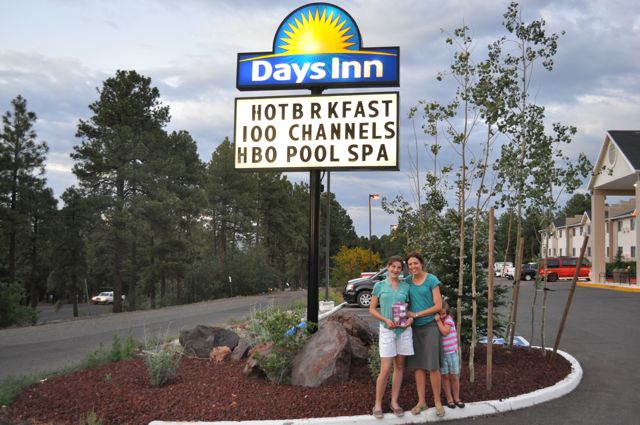 Finally.  HOT BRKFAST in Williams, Arizona!  We arrived on Cope’s 14th birthday…is it really true?  Did I really bring her home 14 years ago?  Time is too short. 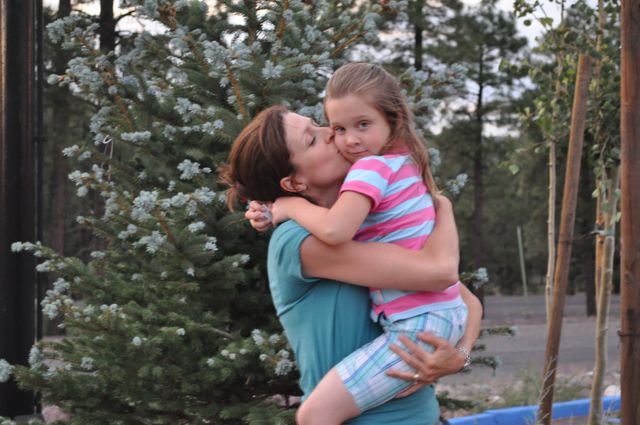 Paige had suffered greatly without her Mama 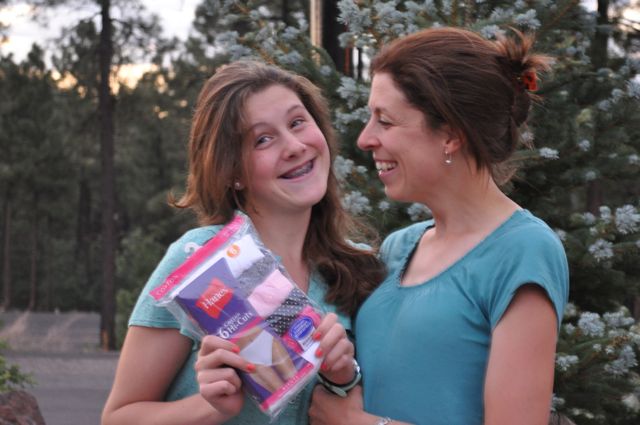 I gave my oldest, underwear for her birthday because it’s a long story about her asking me for some for her birthday and me writing an article about it.  “Look super thrilled about your underwear!” I said.  “Thanks, Mom – this is the best present ever!”  It’s so good to see you.  And my hair isn’t all that horrible – even after three days of traveling without a shower.  Yes, this time I was wearing deoderant. 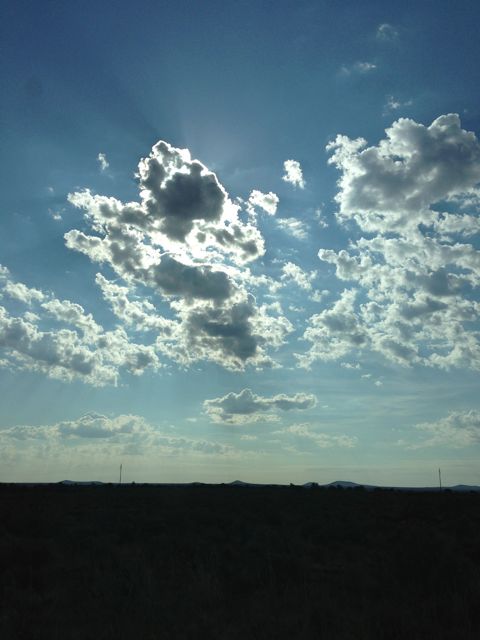 Then we hit the road again and headed to the Grand Canyon.  But that’s a post by itself.
Happy trails!