Melanie of the Mighty Heart

Melanie and I grew up together in Omaha, Nebraska.  Melanie is the youngest daughter in a family of five children.  Her mother, Leslie, a child’s advocate and foster mother, remains one of my biggest heroes.  I spent many hours with the Bartlett family; slumber parties, youth activities, swimming, dancing. I pierced my ear in their basement; you know, the usual.

Melanie is the girl with a big heart, an infectious laugh, and indomitable spirit.

Growing up, the Bartlett family always seemed to have a baby in the house.  There were five naturally-born children, but they fostered newborns, becoming the bridge between birth mom and adoptive family.  It was this example that paved the way for Melanie’s story and her path to motherhood. 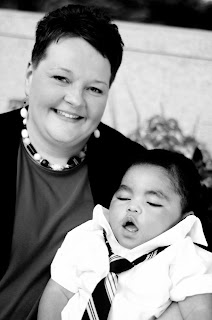 Since I was little, the only thing I ever wanted to be was a mom.  Most of my youth leaders were young, married moms.  So I thought that’s what would happen to me.  I’d go to college, get married, be a stay-at-home mom.  Anything else is un-Mormon, right?  So when I graduated college and years went by, I thought there was something wrong with me.  I referred back to my patriarchal blessing (a patriarchal blessing is a special and individualized blessing given within the LDS/Mormon faith) and pondered on how strangely worded the family part was.  The Lord would provide a way for me to have a family.  Like it wasn’t going to be the ‘typical’ way.  And then we got the call for Nevaeh.

From the beginning of this journey, I’ve always had the end goal of adoption.  But in Nebraska, the goal is always reunification with birth family.  So this is a tough road to become a parent.

In December of 2007, my mom and I received a call from the state saying they had a little girl at Children’s hospital that needed a foster home.  We were not a licensed foster home through Nebraska, but LDS family services was licensed.  So they did a quick walk through of the house and we went up to meet Nevaeh.  It was pretty much unheard of for the state to place a baby in a foster home not licensed through them.  But, as I would come to learn, this one phone call set me on the path to adoption.
Nevaeh, heaven backwards, was born 3 1/2 months premature and only weighed 2 lbs 3 oz at birth.  When I met her, she was almost 4 months old and was just over 7 lbs.  She had a tracheostomy, and my mom and I had to learn all that went along with her care before we could bring her home.  We had her in our home for two months.  It was nerve-wracking to be responsible for a child with a compromised airway, and not a whole lot of sleeping went on in that time.  But she became mine in that time, and I decided to try and adopt her.  Her parents were teens and had all they could handle trying to stay out of jail.  They would never have been able to care for her.
But, after 2 months, LDS family services was wondering when Nevaeh would be available for one of their famies to adopt.  I don’t know if there was miscommunication or no communication on this point between the state and LDS f.s.  But some frustration ensued and LDS f.s. told the state they were not going to use their foster home if adoption by one of their awaiting families was not the end goal.  So after two months, and much to my dismay, Nevaeh was removed and taken to live at The Ambassador, a nursing home with a pediatric floor for very sick kids.  We were devastated, and made the decision to start taking the classes through the state to become licensed foster parents, and get Nevaeh back.
We were still permitted to go see her whenever we wanted, which was all the time.  7 months after she left our home, we were done with the classes and awaiting the home study.  On a Friday night, September 26, 2008, we received a phone call that Nevaeh had pulled her trach out, and the nurses hadn’t gotten to her in time.We rushed to Children’s hospital, but Neveah died early the next morning, just 17 days after her first birthday.  It was awful.  Devastating.  And we were numb for a week as we planned and carried out her funeral, all the while working with her birth family.

And then, my mom and I just looked at each other and said, this can’t have all been for nothing.  So, I prayed and went to my patriarchal blessing, which promised The Lord would provide a way for me to have a family.  I went to the Bishop and explained what I wanted to do.  And he gave me his blessing.  I was going to get the foster care license and foster to adopt.
Meet Antonio:

Antonio was born healthy.  At two months of age, he was severely shaken and beaten by his birth father-broken leg, skull fractures, retinal hemorrhages.  He has some mid-brain and brain stem intact.
But basically, the majority of both hemispheres are dead.  He’ll never walk, speak words, or eat normally. The pediatrician says he won’t live to be 60.  Other than that, they really can’t say.  But we will take every minute we can get.
Meet Brooklyn:
Brooklynn was a little delayed developmentally. But with early intervention, she’s all caught up.
The court system is a mess.  I had Brooklynn’s older sister for 14 months.  Then we had a hearing to determine whether she would go to live with her very marginal dad who had been sporadic in his involvement with her.  The judge, against the recommendations of the child’s guardian  at litem (arguably the most impartial person involved) placed her with her dad.  I’ve had children in my home placed back with their parents, only to see them in a violent 10 o’clock news story.  And the process of adoption is slow.  Antonio was available for adoption 8 full months before the adoption was final.  It’s frustrating and painstakingly slow.  There’s also a term caseworkers use called ‘adequate enough.’ It’s how they measure if a child can return home.  Is the home adequate enough.  Low standards, especially when talking about children.
What is the hardest part of motherhood?
Not being able to be with them all the time.  It’s hard to have to rely on others to help.  And with Antonio, it’s difficult to deal with a system that is meant for healthy children.  I have to fight for everything-proper health care and adequate therapy and my right to keep him out of a school where the the risk to his health outweighs any benefit he might get…Now that I see how hard you have to fight for everything for special needs kids, I have a new found respect. 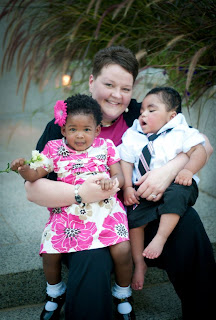 What is your other full-time job?
I work as a juvenile probation officer.
My mom watches and cares for my dad (he had a stroke a couple of years ago that has left him incapacitated).  As far as I’m concerned, she’s a saint and her mansion in heaven is the biggest.  A lot of people called me selfish to ‘do this to my mom.’  But, as she’ll tell you, there’s not really much joy in caring for my dad.  It’s work and unrewarding.  But having the two kids around has blessed her life and helped her focus.
Hurdles:
The biggest hurdle for me in this has been how members of the church sometimes don’t understand…Yes, ideally every child deserves to be raised by a mother and father in faith.  But it’s just not reality for every child to have that opportunity.  And I’m not asking everyone to do this.  This is how God designed for my family to be.  And I couldn’t be more thrilled to be Antonio and Brooklynn’s mommy.
What can we do?
The biggest thing is having common sense about kids in the system.  Many of them are shuffled around way too much, and birth families are given way too many chances to change.  I’m for reconciliation up to a point.  But if you have children that you’ve lost custody of, and subsequent children are born with drugs in their systems, done!  You should not be allowed the opportunity to raise that child.  You’ve given up the right, as far as I’m concerned.  I can be harsh, I know.  But I speak from experience with a system that proclaims to honor the best interests of children, but act in the complete opposite.
As far as what people can do, just becoming aware of situations like this and of the laws in their states.  I did have an attorney approach me about helping him write legislation for stronger sentencing in child abuse cases. (Antonio’s dad only received 15-20years, which in Nebraska amounts to 7.5-10). Not nearly enough for the damage done.
What is the best part of motherhood? 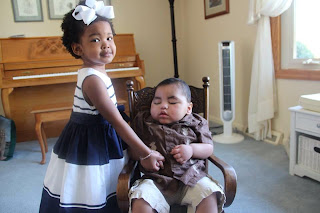 They make everything else go away.  They give me an opportunity to serve and teach.  They are pure joy.
Thank you, Melanie.  I look at these pictures, and am so thankful for women like you. It reminds me that We Can Do Hard Things With Great Love.  And be all the better for it.  It also reminds me that every mother’s journey is different, and when the “typical” doesn’t happen the way we think it should, there is always a way to make a difference in the life of a child.
Thank you, Melanie, for loving our children.