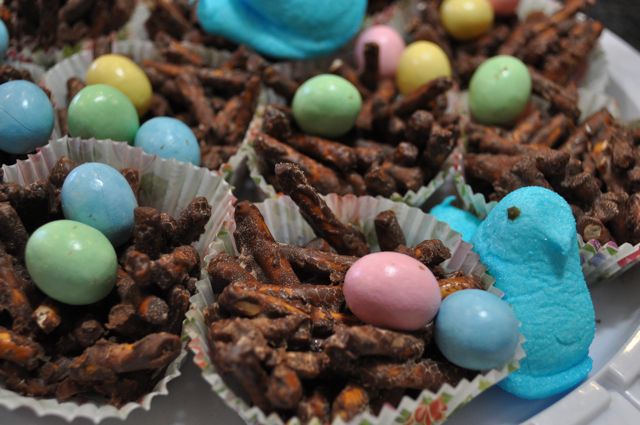 Aren’t these cute?  My mother-in-law made them.  Chocolate-covered pretzels, eggs, and peeps.  She is the queen of creativity and thank goodness for Grandma; she makes sure the holidays are celebrated in style.
We are now in recovery mode from the Easter holiday.  Which was grand.  But I’m very tired.  Last night I dreamed I was running away from a tsunami. I could see it coming and the water was very cold. I knew where my children were, but I couldn’t get to them.  What do you think this means?  My interpretation:  More naps. 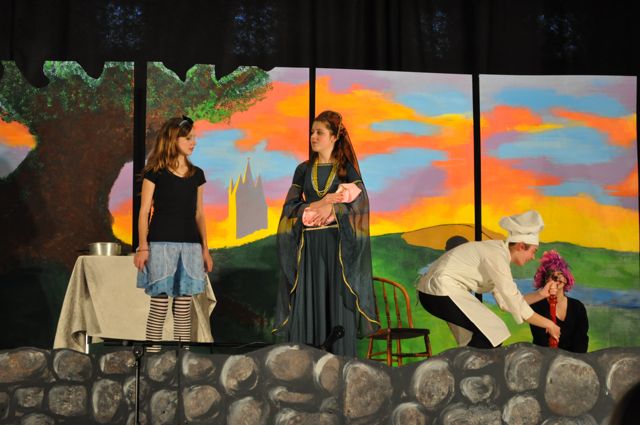 Easter came at the end of an exciting week.
After months of practice, The Dutchess made her debut in her school’s Alice in Wonderland.  At first she was sad she didn’t get the part of Alice.  But then she realized she was born to play royalty and hold a pig baby. 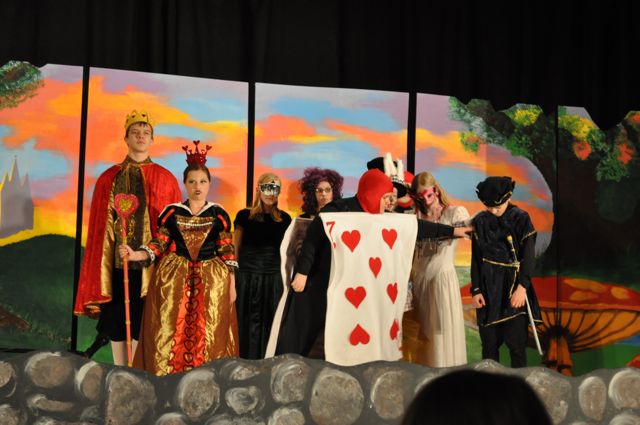 And the boy was the Knave of Hearts who ate the tarts, but didn’t really, only because the poem said so.  Confused?  So was the knave.  Lewis Carroll was truly an intriguing individual. I feel compelled to read more about him.
The play was amazing.  All the kids were great, the set breath-taking, and the directors deserve more than the granola we gave them.  As a parent, I’m especially grateful for teachers who love, care, and educate children.
We forgot to buy flowers (bad mom?) for the Dutchess so Brynne found a pine branch and a popped balloon and wrapped it around the pine branch.  Cope was super pleased.  But I did buy her pizza afterwards so all was forgiven.  I hope. 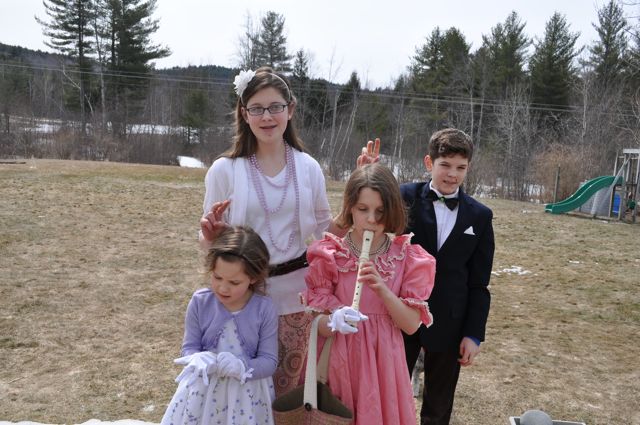 Easter was good.  Pretty much.  On Saturday there were eggs filled with candy, and Nelson got a dusty bottle of bacon bits from the basement.
On Sunday morning I saw the sunrise with Brynne.  I wanted to keep that nice, quiet Easter feeling as we returned home.  Except everyone seemed to be taking turns crying.  Paige said, “Can we wake up again and just start over?”  We had to start over more than once.
Here is our Easter picture.  I really wanted to actually get in the picture.  But that didn’t happen. 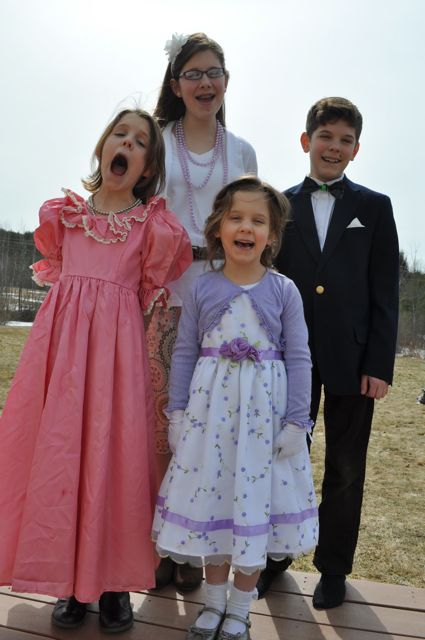 This is Cope telling us that instead of saying, “Cheese” you’re supposed to say “Hi.”  Don’t you think it works so much better? 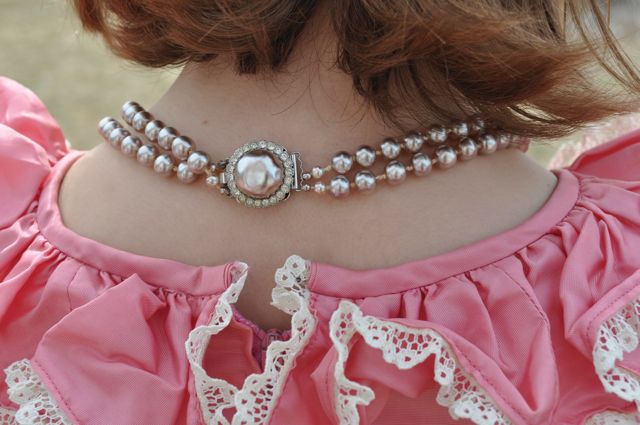 Brynne wore her beautiful new dress from Edna (thanks, Edna!) and Paige wore her beautiful new dress from Barbara (thanks, Barbara!)  Brynne also wore this heirloom jewelry from her great-great grandmother that is really just costume jewelry, but we love it anyway.  Of course it was promptly broken before we even got to church.  Cope was mad as she had already claimed it for her wedding. 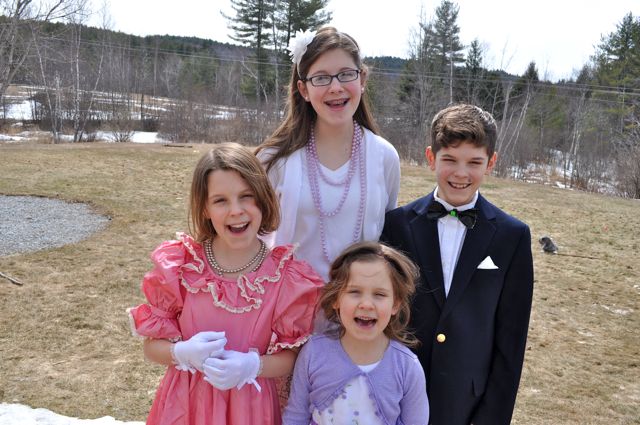 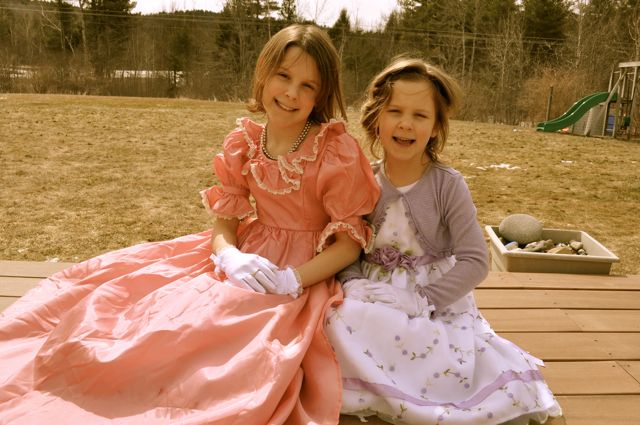 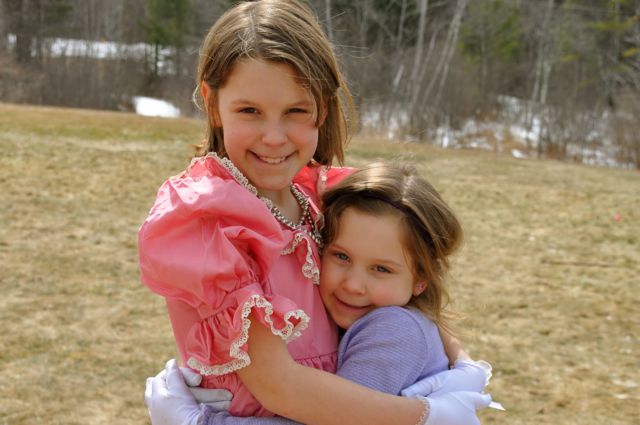 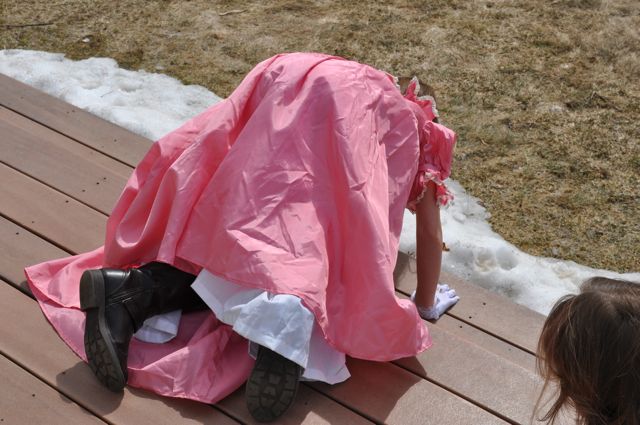 Those white gloves didn’t stay white for long.  I have no idea what she’s doing. 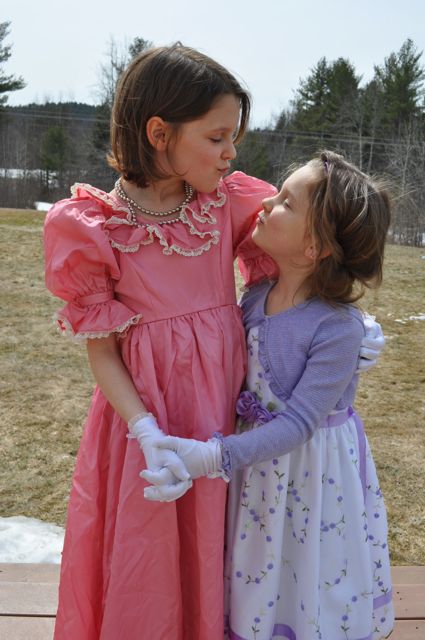 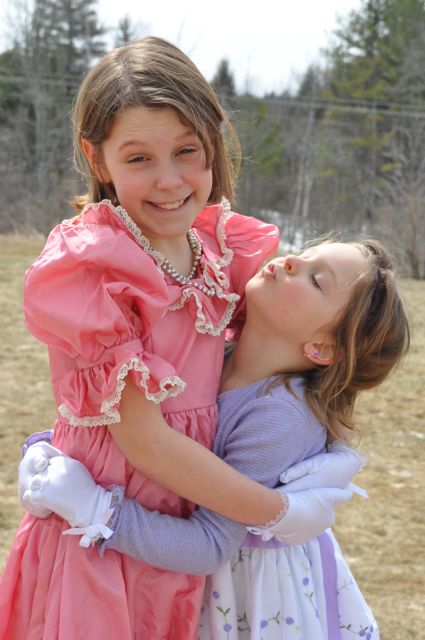 It’s hard not to laugh when Paige is trying to kiss you. 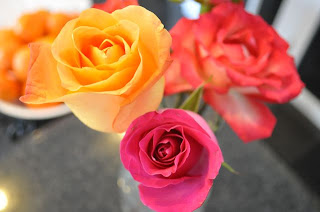 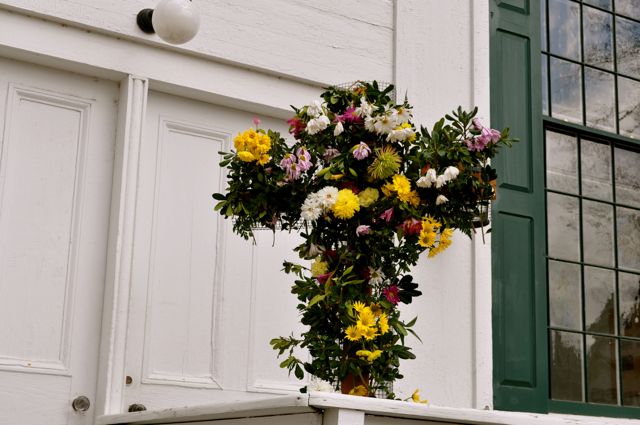 Every year I want to take this picture of the flowers on the cross that sits outside of the congregational church down the street from my house.  I just happened to have my camera with me.
At church we are all asked to speak; usually your turn comes around about once a year if you’re so inclined to say yes.  Guess who got to speak on Sunday?  Lucky ducky me!  That really was the best part of the week – preparing for such a topic.  I’ll have tell you about it sometime when I’ve come out of my hazy stupor.
After church we traveled to cousins in Needham, Massachusetts.  My brother-in-law told me the cake AND the frosting he had made did not have any butter in it.  Instead, he substituted…are you ready for this?  Avocado!  Yes, I know how exciting this is.  I pretty much freaked out I was so overcome with delight.  Oh, I have plans…
I can’t say it was the best part of Easter, because you know, there was the resurrection and all. But it was up there, you know? 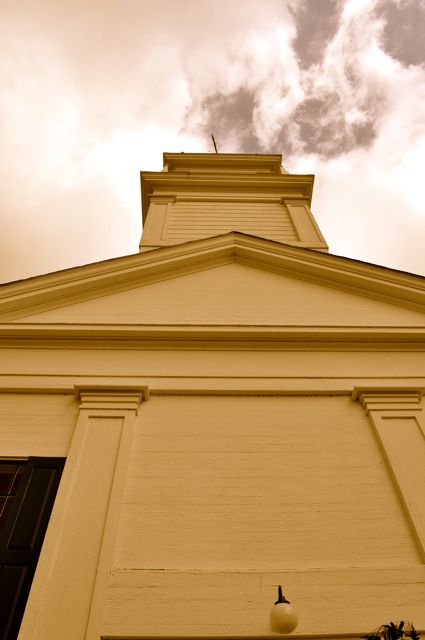 I’m still enjoying the clouds up there.
All weekend Paige kept telling me her throat hurt.  “I have strekt throat,” she insisted.  Poor thing was pretty much patted on the back and told to feel better.  Well.  She was right.  Did you know “strekt throat” usually makes it way back to the person who originally had it?  She had it in December.  All the tooth brushes are being Listerine’d and perhaps the bathroom should be cleaned…
The doctor was a really good doctor, a real no-nonsense but friendly lady.  She asked Paige if she liked school.  “No,” Paige said (which I wanted to refute as a lie.)  Why don’t you like school? the doctor asked.  “I miss my mom,” Paige said, which made me smile and the doctor frown. The concerned doctor quietly asked me if everything was “okay.”  Yes, I said, she likes school, especially after she gets on the bus.
Then Paige proceeded to tell the doctor she has her own room, “but Brynne and I sleep in mama’s bed.” More shock and alarm.  “Oh! We have a lot of things to talk about!” the doctor said.  I wanted to go into a long justifiable explanation…but well, I was tired and crashing from all those Easter holiday jelly beans.
The sun is shining this morning, the kids are back in school…except Paige is still sleeping.  In my bed.
xo.