Suck it Up, Princess

By maisymak October 9, 2012 20 Comments
Happy Columbus Day!
Aren’t you glad Columbus sailed the ocean blue and didn’t fall off the earth in 14hundred and 92?
One Columbus Day I ran the Tufts 10k.
Today, the kids had the day off school and we had an EPIC Capture the Flag game with Massachusetts cousins (yea!) where I started off in clogs and quickly changed into the serious running shoes.  I now have a black eye which only makes our win that MUCH better.  Sorry boys, maybe next time.  Never mind it was 5 against 4 and one of the 4 had an injured hamstring and the other was age two.  Good times.
I meant to write about last weekend’s big race sooner but was slammed with an epic cold on Friday night.  It hit me so hard I began carrying a whole roll of toilet paper around with me.  I have always been considered one classy lassy. But remember, never at any time did Rhett remember Scarlet having a handkerchief.
Anyway, I ran a half-marathon last Saturday and let me tell you how touched I’ve been that people have been asking, when are you going to write the race post?  Hey! Get to the post already!
Thank you for asking dear ones. You enable me in a way I love.
It was a dark and stormy night…when I went to bed on Friday night after an away soccer game with Cope.  We arrived home at 7 and I tucked myself into bed with the little girls at 8:04 p.m.  There I stayed until morning.
The alarm sounded at 6:04 a.m. and it was rather dark (boo hoo!).  I dressed, shivering (as usual) and put on warm clothes.  The race that ended my college running career began with poor clothing choices (no joking but that is another post).  It was rainy but I still decided on shorts and a t-shirt.  Then, I layered with warm pants and a fleece.
A kiss was blown to the honey who still slept soundly, then a hop, skip, jump, downstairs for my ritual race breakfast:  12 grain bread with peanut butter only, 1 banana, and small glass of milk.
Then I mixed my newest race running concoction:
3/4 scoop. ACG3 (“High Voltage Pre-Workout” powder similar to NO-XPlode)
1 Emergency packet
water
18 oz. water bottle
I slowly began to sip.
My two running buddies came at 7 and away we went.  I was happy to see perfect race conditions: cool and light rain.
Favorite t-shirt, worn on Kirstin, relatively new runner and the happiest running girl you’ll ever meet. 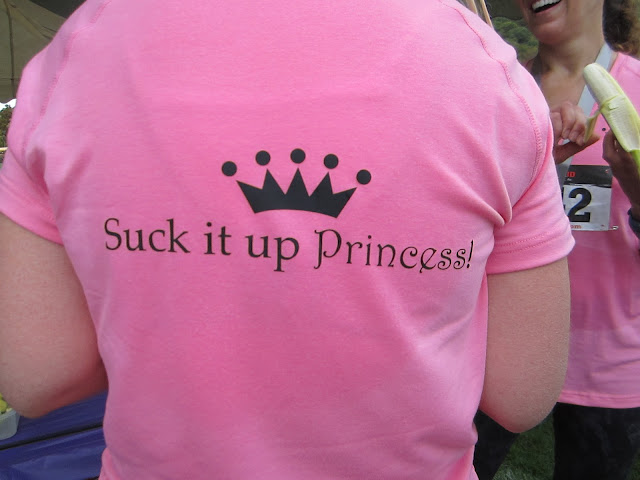 Since the race, I’ve had far too many occasions to use it.  Mostly with myself.
At the last minute I decided to wear my minimalist shoes instead of my Brooks. 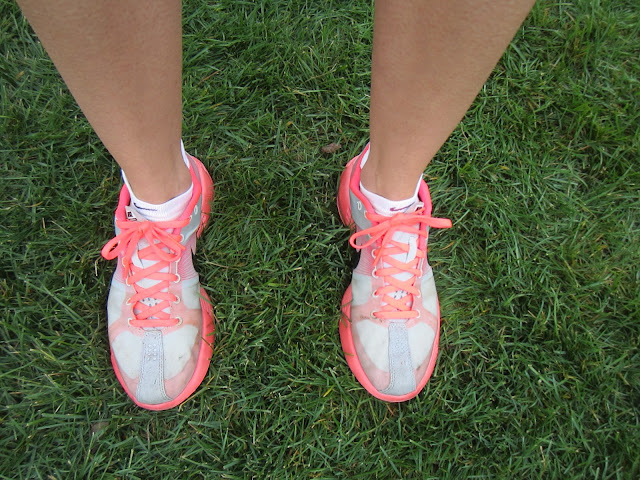 We were taken on a bus, out to the starting point.
Sipping:  last of the race concoction
Stripping: clothes
Consumed: 1 clif shot blok
Carried: 1 GU gel
Wearing:  ipod
Waiting:  for the porta-potty!
With one minute before race starting, I had to abandon porta-potty and hop in the woods next to a guy who pretended not to see me while I pretended not to see him.  Whatever.  Sometimes you just gotta do.
I pressed start on my Garmin watch and away we went!  I always stay on the side to avoid getting caught in the crowds.  Then I slowly work my way forward.
The New Hampshire 1/2 Marathon is kind of a funny race.  There is no timing chip and many people only run the full marathon b/c they want to run a marathon in all 50 states and the very next day is the Maine marathon.  They run two marathons in two days.
The field of runners is getting bigger and faster every year though.  The course is beautiful; weaving along Newfound Lake with a good amount of water and Gatorade along the way.  Much of the race you will run alone or with a few runners ahead and behind.  Without crowds, this type of race becomes a mental one.
I picked someone to pace me and slipped into a comfortable pace that wasn’t too fast and not too slow.
You know what?  I felt good.  Really good.
I didn’t take much water on the way and can’t drink Gatorade while I run.  Plus, my stomach was feeling pretty full from the morning’s intake.
The rain was light, the air cool.
There was a girl ahead of me with a racer back tank and two braids swishing across her back.  She paced me for awhile.  Until I slowly passed her 🙂 She acknowledged with a nod.
At mile 8 I opened my GU gel and slowly sipped away on that until mile 11.
At that point, the GU should be gone and you’re just going to run it all out.
There were four men in front of me.
My favorite part of the race was passing a by-stander who was cheering.  He looked at me, then looked at the four men in front.  “Go get those guys!” he yelled.
So I did.
I passed two.  And you know, men just can’t stand it when a girl passes them. They will feel shame and work extra hard to get back in front of you.  Well, this just wasn’t going to do.
I was just feelin’ it!
Mile 12 and there is 1.1 miles left.  I refuse to look at my watch, in case I jinx the whole thing.
Elton John’s Rocket Man comes on, then Lady Gaga’s Bad Romance.  I have a special place in my heart for that song.  I’ll embarrass myself and say what runs in my head whenever I hear it:  I’m playing for the BYU soccer team and that mean girl from New Mexico(?) pulls my hair and I fall to the ground.  Then, I slowly get up, weave back and forth, fake her out, yell for the ball,  receive the pass in the air and take a shot from the 18.  The ball sails into the back of the net and I win the championship game for my team.  I collapse on the ground.  Sometimes I pull off my shirt like Brandy Chastain, but then I revise the story because hello! we’re at BYU, people!!  The mean girl is mad and Sports Center on ESPN highlights the way I don’t even acknowledge her.
Never mind I never actually played college soccer.  Whatever.  It gets me through the last mile.
In reality:  The announcer mispronounces my last name as I’m running all out into the finish line.  I see a little girl in Brynne’s class – it’s Sophie! and she thinks she recognizes me, then she smiles because she really does recognize me!  She waves frantically, jumps up and down yelling – It’s Brynne’s mom! and I tell you, that’s even better than winning the championship game.  I think.
I sail in, glancing at the clock.  Oh my gosh, I just got my PR.  This is so shocking I burst into tears.
I’m a rather emotional runner.
But let me tell you, I was undertrained and recovering from plantar fasciitis.  I was tired from a long week of kids and away soccer games.  I wanted to run well, but hardly dared to raise my hopes too high.  I just kept thinking, thank you, thank you, thank you.
The conditions were perfect.  It all just came together.  I had a running base, and I have suspicion that those green smoothies all month hadn’t hurt either. 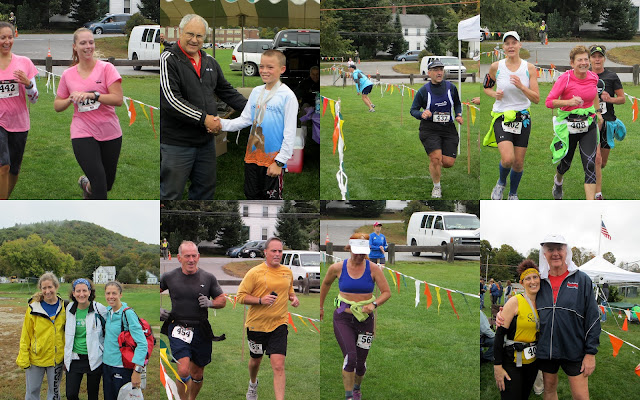 For one reason or another, these people all made me happy.  Happy Kirsten, the 12-year-old boy who ran with his dad and won his age group, the older lady up top who grinned while finishing, the lower right picture of the 65+age group New Englanders.  I see them at almost every race I go to.
It is such a high I know I’ll never stop running as long as I have legs.
Later I call my brother because you can brag to your brothers.  Brother says, “You’re 37 and you got your PR?  Usually people are declining at 37.”  He then laughs and sputters in disbelief.  Brother says, “I’m not trying to insult you!  I’m just saying…”

Well Brother, did you know that I’m entering one of the most competitive age groups in running?  My theory is that women are starting jobs and having babies in their 20s.  The serious ones come back though, and BOY DO THEY COME BACK. It is my observation that we have quite a few really good years ahead.  We haven’t yet hit our PRs, have we?

And now for some feet pictures. 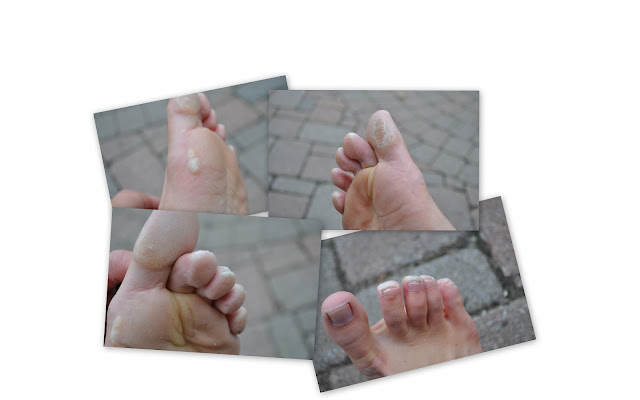 The tops of my toes are now black from bruising but darn it, I had already made my Picassa foot collage.
No matter.  Runners don’t have pretty feet.  It’s something we take pride in, don’t we?  We are using are feet.  We hurt them and they still take us places. They’re like The Giving Tree. Nails must be kept very short or they hit the top of shoes while running.  They are hit and knocked around, bruised, calloused, and rubbed raw.
But I kept looking down at my feet and thinking… feet, you are so beautiful.  thank you.

And that, friends, is the end of the story.  Until next time.  Xoxo – I hope you have some happy running this week too!